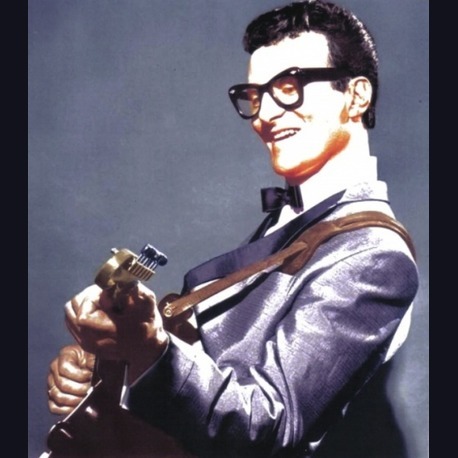 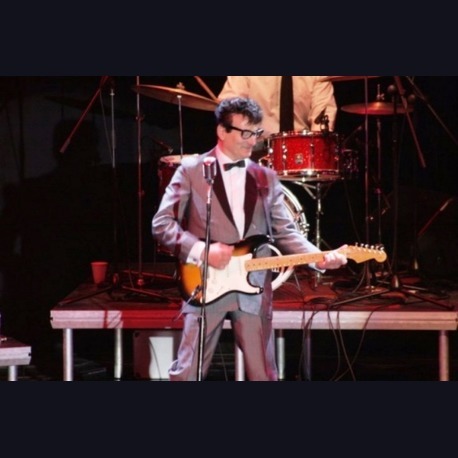 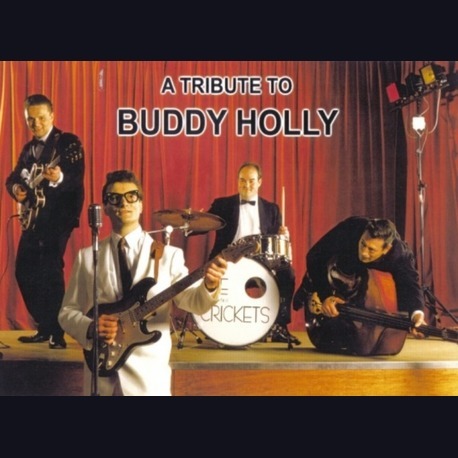 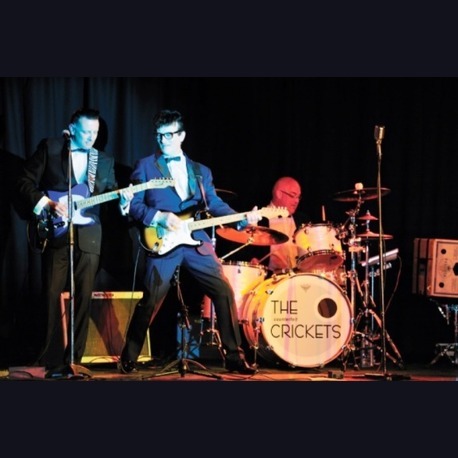 Marc's show business career has seen him appearing in various Tv and feature film productions. From ''eastenders'', ''casualty'' and ''Lovejoy'' to ''the fifth element'' and ''mrs brown''. Marc has also Appeared on tv commercials and has even been a dj for fcuk fm.

However it is his association with the music of buddy holly and the crickets that Marc is best known.having been a long term fan of buddy it was inevitable that when marc began singing in a band various holly tracks would find their way into the repertoire.

It was'nt long before people began remarking on the similarities between marcs vocal style and that of buddys.a pair of horned rimmed specs completed the illusion and one of the first tribute shows on the circuit was born. An appearance on tv's ''Stars In Their eyes'' reinforced marc's position as the leading exponent of buddy hollys music, and when marc took on the lead role in Buddy the musical he showed that he could portray the character just as easily.

Sir Cliff Richard was entertained by marc at one of cliffs birthday partys were marc found himself singing ''living doll'' and ''Move it'' infront of the man himself!

Marc parted company with the original band of which he was a member and went on to form the counterfeit crickets. Together they have played throughout the uk and europe gaining fans and admirers wherever they go.

Marc became a founder member and co producer of of the hit touring show ''rockin on heavens door''in which he appeared for 8 years. He then went on to help form and perform in the Roy Orbison show 'in dreams'. Marc also produces the theatre shows 'Rave on' and 'buddy holly's winter dance party' and also performs as buddy in the show 'a legend reborn'
Shortlist

"Marc mirrors Buddy with a masterful performance. Marc has appeared in the films The Fifth Element and Mrs Brown along with television productions such as Eastenders,casualty, Silent witness,and Dangerfield. He filled the theatre with nostalgia, his performance recreated an era of escapism in which the audience was sucked. The finale featured big songs by Buddy the Big Bopper and Richie Valens - a glittery and glamorous set with a flashy atmosphere even those who are not fans of Buddy may become so by the end of the show."
- Buddy Musical Review

"Led by a bespectacled Buddy Holly lookalike they did convincing versions of all the best know songs recorded by the legendary rocker. The audience spanning three generations enthusiastically applauded them all. At the end they demanded and got an encore. Nostalgia may be a thing of the past but while the likes of these lads are around Rock n roll will not fade away."
- Country Music News+routes Magazine

"Following this came Buddy Holly alias Marc Robinson A highly experienced performer, who once appeared on ITV's Star In Their Eyes ,no doubt he has studied every detail of Buddy coming so close in sound and appearance to the legend himself that for one moment I truly believed this was the real man before m. His energy and enthusiasm shone throughout as he delivered numbers like "Peggy Sue" "That'll be the day" "Brown eyed handsome man" and Think it over."
- North Essex Newspaper

"Marc Robinson picked up not only a silver grey suit and huge specs for the performance, but also a heap of confidence and charisma and whose vocals were uncannily true to the original. The group recreated the ballads and rock n roll hits of Buddy Holly and the Crickets in a way that underlines their admiration for the shy young man whose talent was snuffed out all those years ago."
- The Stage And Television Today

"Marc Robinson is well known as a Buddy Holly tribute but this is the 1st time I have seen Marc perform as a solo artist without his usual backing of the Counterfeit Crickets. All the classic Holly hits were featured in Marc's set, and all were performed with great attention to detail both musically and visually. On this performance it is no surprise that Marc is one of Britain's leading tribute artists."
- The Stage and Television Today

"Marc Robinson and the Counterfeit Crickets. The white-suited Robinson bore a striking resemblance to the rock and roll hero which was made even more spooky by never allowing the character to slip throughout the set. A great look authentic sound and a great performance they could handle the Buddy West End musical with ease."
- The Stage and Television Today

"Marc sprang about the stage, a confident and authentic re-enactment of Buddy Holly swinging his guitar and rousing the audience to dance in the isles. Well worth the journey to enjoy the spontaneous fun of this rip roaring evening."
- Local Press

"Number 1 lookalike Marc pays tribute to his hero. Marc has been described as having a near obsessional attention to detail from the wild knee dropping presentation and exact match as are the suits are or exact match as are the huge rim specs. and Fender Strat, a 50 date tour starts in the autumn after he has appeared at the Isle of Man TT Races in june, culminating in a New Year Day gig in Paris."
- Local Press

"Those who have followed our local star Marc Robinson will be really pleased to know that his amazing performance as Buddy Holly has led him being given the lead role in Buddy the Buddy Holly story on the Isle of Man It begins its run on July 17th 2003 and goes on until August 9th 2003 so if anyone goes on holiday there, they will recognize a familiar face as they enjoy Marc's professional entertainment."
- Local Press

"Buddy band set for world tour. Their act which is based on the music of Buddy Holly and the Xrickets will be leaving this weekend to play five dates in Dubai, Bahrain and Oman. On their return they are playing a special amphitheatre concert in Spain."
- Local Press

"Put another way when it comes to lookalike sound alike tribute performers Marc Robinson had the joint rocking. they don't write like that anymore, they should put a night like that on prescription and it would save the national health service a fortune".
- The Scotsman

"An accomplished singer in his own right and where others would have sent up the original, he was mindful that imitation was the sincerest form of flattery."
- Daily Telegraph

"Buddy : The Buddy Holly story is filled with the hits songs which made Buddy Holly a star in the 1950's. Marc Robinson who has appeared as Holly in numerous theatre and concert productions takes on the lead role. Marc has studied him well and sings and moves like the star with similar charisma."
- Isle of Man Courier

"Marc slides on and straight into a medley of Peggy Sue, It's so easy, and That'll Be the Day. Along with everyone else I had a super evening's entertainment and look forward to the next time. If you have not seen the band I recommend that you do as soon as possible."
- Buddy Holly and the Crickets Fan Club Magazine

"Buddy Holly (Marc Robinson) was note perfect particularly during the No1 hit It Doesn't Matter anymore, all the great songs were there `Peggy Sue' `Heartbeat' 'It's so easy and Rave On
which started the dancing in the aisles."
- Arbroath Herald

"Start Robinson's movements as Holly were as sharp as the crease in his trousers, and was it pure chance that he bounced into Heartbeat just when Nick Berry was to be heard singing it on T.V it just proved they don't make em like that anymore."
- The News (Central South)

"Next came Marc Crickets's immaculate Buddy Holly. He looked and sounded the part as he breezed through the inevitable Peggy Sue, Maybe Baby and Heartbeat in a crisply pressed shiny grey suit and those specs."
- Gloucestershire Echo

"Buddy Holly gave a classic performance of the all American boy next door."
- Normanton and Wakefield Express

" Oh Boy!!! what a performance from Marc Robinson as Buddy Holly who had the audience raving on."
- Skegness Standard

"it's easy to imagine Buddy Holly is alive and kicking when watching Marc Robinson in action."
- The Guardian

All the Hits... All the Fun... A wonderful Buddy Holly tribute show available as a solo act or full live band. With many years experience appearing at prestigious venues throughout the UK...

Graham Holly not only looks similar to Buddy Holly but he is the closest that you are ever likely to hear when it comes to a Buddy Holly sound alike! That's a bold statement to make, but you don't...

Alan A Tribute To Buddy Holly

Get ready for some serious Rock 'n' Roll as we take you back in time to experience that nostalgic era again as Alan performs a fantastic tribute to one of the world's all time greatest legends and...