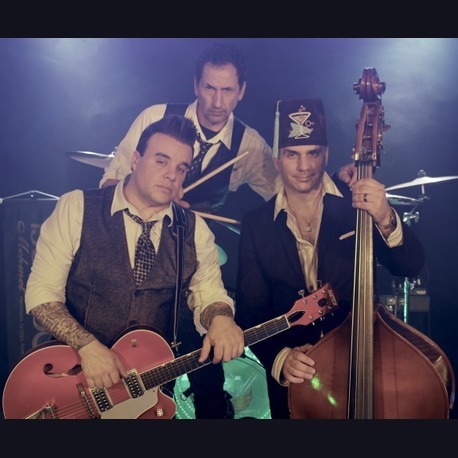 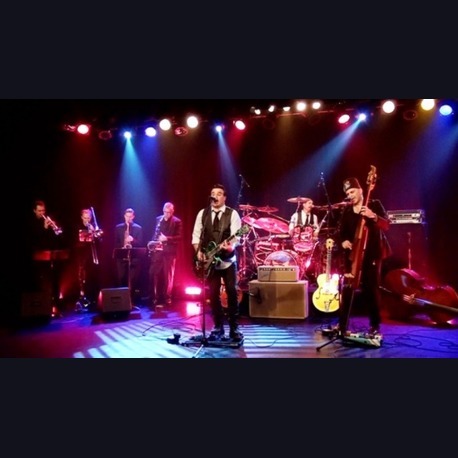 This Cat On A Hot Tin Roof

The band is formed by seasoned players bringing great sounding entertainment for a diverse audience.

Americano was formed in 2013 by Anthony Bambino (a Gretsch endorsee). An avid fan of Brian Setzer and The Stray Cats he started putting together a tribute act. After some research and seeing there were no other Brian Setzer Orchestra tribute acts, he recruited fellow players Paul Ranieri and Claudio Galinski to put together Americano. Carefully selecting the hits that everyone know from the Brian Setzer orchestra and Stray Cats he also added some 50's favorites in the set list as swell to give a little diversity to the show.

Americano offers two versions of their show tailored to specific budgets or venue sizes...First is the scaled down show which is a trio with all the horn parts recorded on tracks that the band plays along to. This is perfect for a venue that has a limited budget or has limited space that can't accommodate a 7 piece band, but make no mistake the sound is just as big as the full band . Americano has had all the songs charted and recorded to allow the act to be much more mobile and accommodating. You can get that big band sound in a smaller venue on a smaller budget,

Secondly Americano offers their "big show. This compromises of the foundation trio along with 4 horn player section and 2 female back up singers. Mind you both shows sound very similar but the bigger show gives a larger visual of the horn players and female back up singers as well. Both shows were strategically put together for the viewers pleasure and has been selling out wherever we play.

Americano is suited to play in every type of venue such as clubs, casinos, corporate parties, festivals, theaters, cruise lines, special events, touring national and inter-national and any other next-level opportunity that fits.
One thing for sure........ Americano is gonna Rock Your World !!!

Unbelievable! the BEST Brians Setzer Orchestra show I've ever seen! So energetic and fun to watch and listen, I danced the entire night!!

Truly the best band I've seen in years. playing something to refreshing and fun, brought me back to the years when music was fun and alive. I couldn't stop moving in my seat the entire show

Anthony's guitar playing and vocals are spot on! The band is amazing and play the songs how Brian plays them I would travel almost anywhere to see this band live again!

It's a Rock and Roll Dance Party... a tribute to the legend that is Buddy Holly, all the hits and more in a show covering the life of Rock 'n' Roll legend Buddy Holly performing all his classic hits...

Get ready for some serious Rock n Roll folks, as we take you back in time to experience a stunning and remarkable show performed by one of the finest Rock n Roll singers in the business, Alan Becks...

The Modern Day Answer To The Andrews Sisters

With killer heels, killer curves and killer harmonies, The Rockabellas have been called to the musical front line to lift the spirits of ladies and gentlemen all over the world. In top to toe pin...