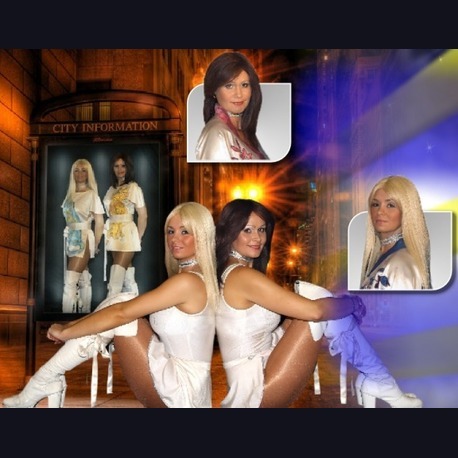 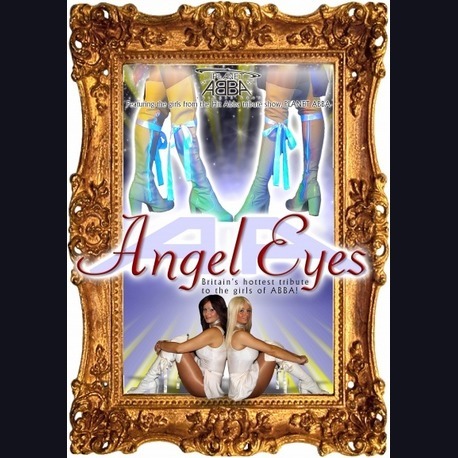 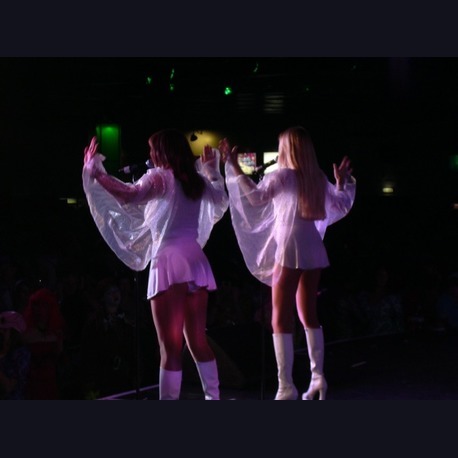 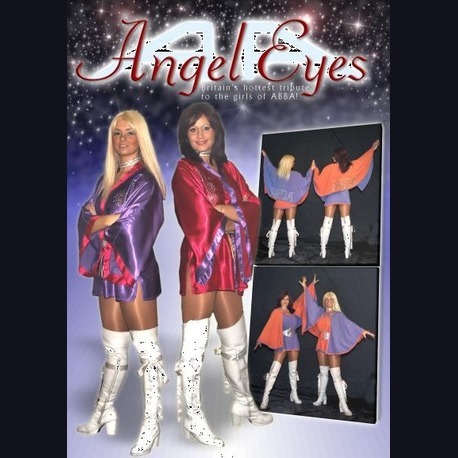 Angel Eyes are the girls from Planet Abba.

Since their formation in 2002, Angel Eyes have succeeded in establishing themselves as the UKs leading Abba tribute duo. Their professionally choreographed stage show, with many costume changes, faithfully encapsulates the sights and sounds of Abba and their endless stream of unforgettable hits.

Gaining a renowned reputation, whilst fulfilling many of their regular bookings in hotels and casinos, returning time and again due to high demand, they also provided the entertainment at "The Highland Games", varied outdoor music events in central London and many high profile conferences.

Angel Eyes have worked alongside several named artistes, including The Four Tops, Slade, Mudd, Jimmy James and The Vagabonds, 911, Showaddywaddy, Alvin Stardust, The Real Thing and The Royal Philharmonic Orchestra.

As the girls of Planet Abba, the internationally acclaimed, highly sought after band they were requested by the BBC to appear in a documentary. They featured in BBC 2's "Pay Off Your Mortgage". Recently Planet Abba were the pre-match entertainment at Leeds Rhinos stadium, live on Sky TV. Last year they were also guests of honour, performing in front of thousands for a radio station in Bangalore, India.

Their professionalism and sheer enthusiasm both on and off stage, have secured them many re-bookings and has earned them a reputation beyond reproach. From football stadiums to casinos; from garden parties to palaces. Angel Eyes are the perfect choice for all occasions - themed nights, special functions, party nights or weddings, the list is endless.
Shortlist

Just a quick note to thank you for last night. I have had so much good feedback from folk saying how much they enjoyed you including our Chief Executive who e-mailed me on the way home to express her delight at the performance, and of course I also thought you were all the dogs b*****ks..well, its kind of appropriate!!
- John Golding - Club Manager The Kennel Club UK

"A great choice for a wedding.
Thoroughly enjoyed it. Brilliant"
- David Tennant (Dr. Who)

"The best Abba tribute I have ever seen, you guys were fantastic!"
- Derren Brown

"In my line of business I come accross many tribute bands and have indeed seen a number of Abba tributes, but I have to say Angel Eyes take some beating ! ! ! ! !"
- Steve Wright

I Loved You I Loved You
- Sue Nicholls (Coronation Street)

"Planet Abba overwhelmed us by their performance and the nostalgic trip on saturday night. The audience turnout was unprecedented. Planet ABBA didnt disappoint and came back for 3 encores which speaks of the effect they had on the audience. It was fun to interact with such warm and absolutely down to earth people and muscians. We look forward to having them again sometime and working with you on more acts coming to India in the near future."
- Jagadeesh M.R - Radio Indigo, Bangalore

The evening was a huge success. The feedback we have had is all positive. All Abba fans obviously but they are surely the most discerning in this case and I haven't heard one negative comment. The marquee was bouncing!! Thank you for your help, I hope they all got back home ok and enjoyed their visit to pembroke.
- Elisabeth Gossage - Pembroke Music Festival

David, I wish to thank you very much for recommending and arranging for the girls to appear at our function in the sergeants mess
- RAF Innsworth

They were absolutely sensational! Their Voices, costumes, instrumentals were very very good. A truly professional
Performance by four very talented and very nice people. Everyone thoroughly Enjoyed the night, which was a special Night for us - this being our last big social Event before this wonderful Government of Ours closes our unit (RAF Boddington) for Ever as part of the defence cuts!
ABBA made it a night to remember. I cannot praise their performance enough. Thanks again to you and them. Very best wishes.
- Lorraine ColeThe Best ABBA tribute I have ever seen, you guys were fantastic!
- Derren Brown

Simply the best Abba Tribute I have ever seen. I was blown away from start to finish. Never before have I seen a band command an audience in the way that you guys did. Fantastic!!
- Cameron Scott - Camscott Leisure

Abba Tribute band Abbamania, the UKs original Abba tribute are widely regarded as one of Europes Premier Abba tribute Bands. Their sensational live concerts have taken them all over the...

A Tribute To Abba

There has been and will only ever be one ABBA! With that in mind UK Bjrn set themselves apart by celebrating the timeless music, without pretending to be the Swedish sensations themselves. No bad...

Not just another Abba tribute. Do not delay, BOOK TODAY! Gimme ABBA have been performing this fabulous tribute to ABBA for over 16 years and have enjoyed theatre and festival shows worldwide. Just...