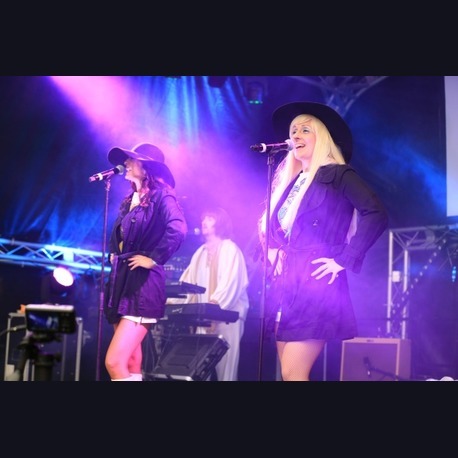 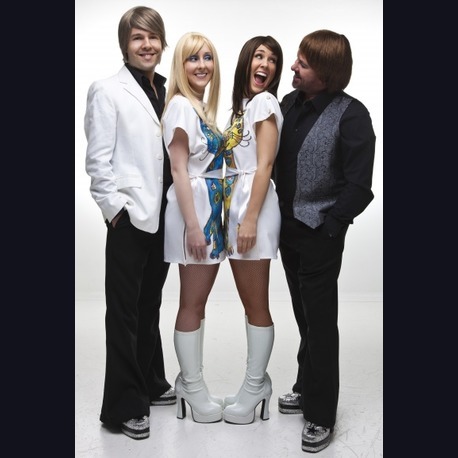 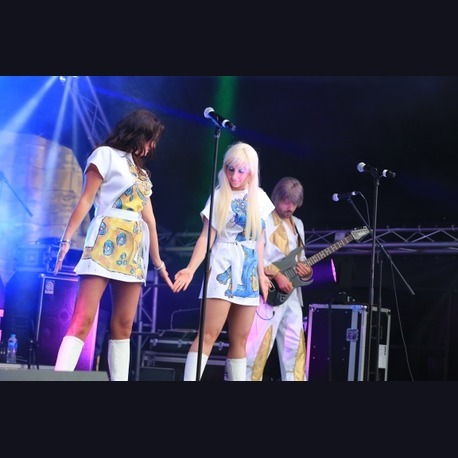 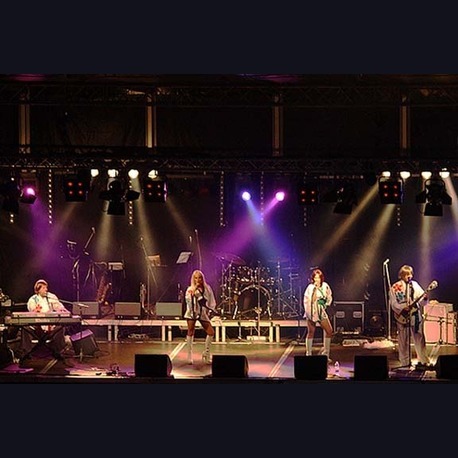 Sensation are one of the UK's premier Abba tribute bands, bringing the authentic sound of Abba back to life! With particular attention to detail, Sensation combine high quality musicianship, authentic replica costumes, exciting choreography, sizzling performances and a sprinkling of lighthearted humour to produce a dynamic jaw-dropping show with universal appeal. The band even speak Swedish on stage!

Sensation are proud to present a high-quality service and show that have allowed them to become one of the UK's hottest Abba tribute bands, wowing audiences and selling out venues wherever they go. This Abba tribute band have already established a growing list of regular clients including Ikea, American Express, Four Seasons Hotels, Tesco, Clas Ohlson, G Casino, Holiday Inn and Help For Heroes along with extensive bookings for festivals, weddings, corporate events, private parties and special occasions,

Sensation's most popular lineup is the authentic 4 piece Abba tribute act featuring Agnetha and Frida on lead vocals, Bjorn on guitar and vocals and Benny on keyboard and vocals.

Sensation are a fantastic live Abba tribute act bursting with high energy, fabulous vocals and some audience participation thrown in for good measure to guarantee a great time for you and your guests.

A high quality sound system is provided to guarantee you high-end audio playback to bring out the musical layers necessary to recreate the Abba sound giving you an authentic Abba tribute experience.

All of the band members are professional vocalists and musicians with many years of international experience under their belts. This allows Sensation to bring the magical sound back to life and ensures you can put your boogie shoes on and dance the night away to the magic of Abba.

Sensation are more than just another abba tribute band giving 110% to every aspect of the show. Even after the final encore, Sensation never fail to leave the crowd shouting for more leaving you with the peace of mind that youre in safe hands with a band that will deliver a night to remember for you and your guests.

Since the release of Mamma Mia in London's West End and the subsequent smash hit film, the music of Abba has seen a massive come back in recent years bringing along a whole new generation of fans and increasing the demand for this Abba tribute band even more. Sensation perform their fantastic Abba tribute show all over the UK and internationally bringing high energy, lighthearted humour, sizzling performances and the classic Abba sound to guarantee you an unforgettable night!

Set Options
Sensation adapt the show to cater for your specific event however big or small. This Abba tribute act offer several set options to give you a variety to choose from for your event, making it truly personalised:

All-In-One Package
For no additional fee Sensation can also provide you with pre-show, interval and post-show background party music to give you a full evening's entertainment all in one package!
Shortlist

ABBA Sensation are an absolute pleasure to deal with, as pleasant and accommodating off stage as they are professional and dynamic on stage. From arrival to departure they are efficient, friendly and understanding of our venue's particular needs. If only all tribute bands could be like this!
- Masham Town Hall North Yorkshire

We thought this sold out show was excellent. The audience were excited and happy, and obviously really enjoyed themselves. The working relationship was very good and the band were very professional and committed.
- PENRITH PLAYHOUSE

"On behalf of all the staff at IKEA, I would like to say a big 'thank you' for helping to make the store's 15th birthday a success. We had really positive feedback from everyone that experienced the band's performances and we will definitely be inviting you back again to play a part in our future in-store celebrations."
- Adam Riley, Marketing Manager, Ikea

"I just wanted to say a massive thank you for the Leeds launch last week. Everyone commented on how great you sounded, how professional you were and what a great job you did!"
- Clas Ohlson, Leeds

"You were awesome, thank you so much for bringing the night to an end in such spectacular fashion. That was the loudest we'd heard the crowd sing all night!"
- Jenny, Rebellion Festival, Blackpool

"Thank you for the visit to the Netherlands and the great performance. We've only had positive reactions on Sensation, you guys were perfect! We will definitely be seeing you again soon for another show."
- Paul, Festival 4U, The Netherlands

"Sensation took the Isle of Wight by storm, you could almost say they were better than the original ABBA, great fun and lovely people, would certainly recommend booking them early as they will definitely bring life to any party, can't wait to see them again."
- Martin, The Windmill Inn Hotel, Isle of Wight

Melody French is AGNETHA -
Born in Watford, Hertfordshire, Melody started performing at the age of 5. At 16 she decided to pursue her love of song and dance at Performers Dance College in Essex. Melody toured the UK, Ireland and Europe in 'Thank You For The Music', the ABBA tribute smash hit show as Frida 2007/2008. She spent 2 years touring the UK in 'A Night At The Musicals' where she was Lead Singer/Dance Captain. She has also toured in 'The Rock n Roll Years' as Lead Singer. Before that Melody worked as Lead Production Singer for the Stadium Theatre Company onboard P&O Cruises stopping at destinations such as Australia, Japan, Singapore, North America, The Carribean and even Sweden!Melody always loved the music of ABBA growing up, from the high energy in songs such as Voulez Vous and Dancing Queen to the slower ballads such as Name Of The Game and The Winner Takes It All. After being fortunate enough to work in theatres and arenas around the world performing the songs of ABBA, it seemed the next logical step was to create an ABBA tribute band of her own. Melody is proud to present to you all the music and energy of Sensation and hopes to see you very soon.

Carly Hobbs is FRIDA -
Australian born and bred, Carly can't remember a time when she hasn't been on stage! Growing up in a musical household, the music of ABBA was never far away and Carly was hooked from a young age. While studying performing arts at Melbourne's Monash University, Carly created the lead role of Traute in the world premier of the musical The White Rose which she then toured with to Singapore. Performing professionally for the last 10 years, other roles Carly has played include Mimi (Rent), Mabel (Mack and Mabel) and Millie (Thoroughly Modern Millie) for which she won a prestigious musical theatre award. On the acting front, Carly can be spotted in numerous films, commercials and television shows, including On the Beach and Neighbours. Leaving Australia, Carly spent several years touring the world with leading cruise companies P&O and Thomson as lead singer.
Having been bitten by the ABBA bug in her youth Carly spent much of her time at sea performing as Frida in the company ABBA shows. After settling in the UK it seemed the obvious choice to take the role of Frida once more in Sensation.

Pete Nulty is BJRN -
Born in London, Pete grew up in a household driven by music and at aged 14 began playing guitar. It was no surprise he soon discovered a passion for a variety of music from the Classic Rock genre to Blues, Soul and of course, the family ABBA collection. Pete soon found himself diving into the London club scene, playing with a number of bands over the years and learning the ropes as a guitarist, vocalist and songwriter. The hard work paid off and the years of club nights culminated in a successful Rock-Pop project with the release of an album, appearances on radio & television (MTV) and regular gigs across the UK. Pete then went on to enjoy a performing and writing partnership with UK soul vocalist Audley Anderson, broadening his horizons with performances in Italy and East Africa to name a few and co-writing material for an album project. Looking for a new direction, Pete went full circle back to his childhood and re-discovered ABBA all over again. Inspired by the strong songs, high energy performances and feelgood factor, it seemed only logical the next step for Pete was taking the stage as Bjorn in an ABBA tribute band.

Chris De Gliss is BENNY -
Chris is a huge fan of ABBA and loves all of ABBAs music starting from the early days of 'Ring Ring' and Waterloo' right up to the final days of 'One Of Us'. An experienced musician, Chris has played piano and keyboard on a professional level for over 25 years in more than 40 countries all over the world including Germany, France, Spain, Portugal, Italy, Malta, Cyprus, Dubai, Qatar and Hong Kong to name but a few. In the process he was often told there was an uncanny resemblance between him and the brilliant Benny Anderson from ABBA so it seemed like a perfect choice for him to join an ABBA tribute band and perform as his favourite ABBA member.
In fact, the links to Sweden remain strong. Having worked on the Swedish Pianobar circuit in the 1980s and living in the country for 7 years, Chris is now settled in the UK but married to a Swede, of course.
Chris has lots of experience having worked with some of the best ABBA tribute bands, allowing him the opportunity to get to know the heart of the songs and how to deliver them in the way only ABBA can. Chris hopes you enjoy the show.

Not just another Abba tribute. Do not delay, BOOK TODAY! Gimme ABBA have been performing this fabulous tribute to ABBA for over 16 years and have enjoyed theatre and festival shows worldwide. Just...

Abba Tribute band Abbamania, the UKs original Abba tribute are widely regarded as one of Europes Premier Abba tribute Bands. Their sensational live concerts have taken them all over the...

The Abbaholics have many years experience entertaining the crowds around the uk with a combined 25 Years! We take pride in our show and love entertaining! We provide top quality pa music system...