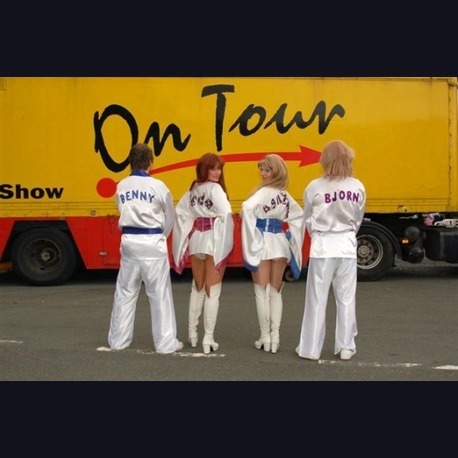 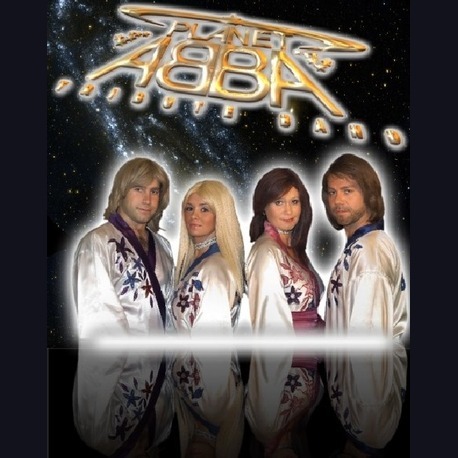 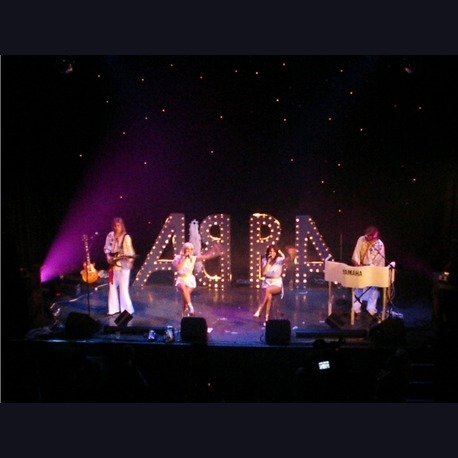 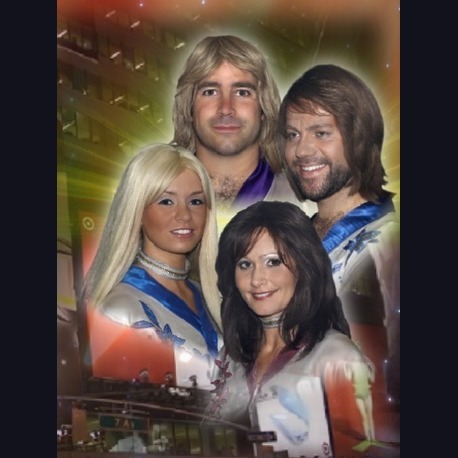 Following Abba’s announcement, we are delighted to say that we were interviewed three times thoroughout the day on the national BBC News and independent TV and radio. As their tour will be hologram based, we would also like to add that we were the original holograms when ABBA world came to Earl's Court, London.

Since their formation in 2002, Planet Abba have succeeded in establishing themselves as the UKs leading Abba tribute show. As they have grown in both popularity and reputation, so too has their stage show. Planet Abba can now boast a custom built 6k P.A. system, controlled by a top of the range Allen and Heath mixing desk.

Their professionally choreographed stage show, with many costume changes, faithfully encapsulates the sights and sounds of Abba and their endless stream of unforgettable hits.

Gaining a renowned reputation, whilst fulfilling many of their regular bookings in hotels and casinos, returning time and again due to high demand, they also provided the entertainment at "The Highland Games", varied outdoor music events in central London and many high profile conferences.

Planet Abba have worked alongside several named artistes, including The Four Tops, Slade, Mudd, Jimmy James and The Vagabonds, 911, Showaddywaddy, The Real Thing and The Royal Philharmonic Orchestra.

This internationally acclaimed, highly sought after band were requested by the BBC to appear in a documentary. They featured in BBC 2's "Pay Off Your Mortgage".

Recently Planet Abba were the pre-match entertainment at Leeds Rhinos stadium, live on Sky TV. Last year they were also guests of honour, performing in front of thousands for a radio station in Bangalore, India.

Their professionalism and sheer enthusiasm both on and off stage, have secured them many re-bookings and has earned them a reputation beyond reproach. From football stadiums to casinos; from garden parties to palaces. Planet Abba are the perfect choice for all occasions - themed nights, special functions, party nights or weddings, the list is endless.

Planet Abba overwhelmed us by their performance and the nostalgic trip on Saturday night. The audience turnout was unprecedented. Planet ABBA didnt disappoint and came back for 3 encores which speak of the effect they had on the audience. It was fun to interact with such warm and absolutely down to earth people and musicians. We look forward to have them again sometime and working with you on more acts coming to India in the near future.
- Jagadeesh M.R, Radio Indigo, Bangalore

Just a quick note to thank you and the band for last night. I have had so much good feedback from folk saying how much they enjoyed you including our Chief Executive who e-mailed me on the way home to express her delight at the performance, and of course I also thought you were all the dogs b*****ks well, its kind of appropriate!
- John Golding, Club Manager, The Kennel Club

A great choice for a wedding band thoroughly enjoyed it. Brilliant.
- David Tennant (Dr. Who)

I wish to thank you very much for recommending and arranging for Planet Abba to appear at our function in the Sergeants' Mess RAF Innsworth on Sat 22nd September. They were absolutely sensational! Their voices, costumes, instrumentals were very very good. A truly professional performance by four very talented and very nice people. Everyone thoroughly enjoyed the night, which was a special night for us this being our last big social event before this wonderful Government of ours closes our Unit (RAF Boddington) for ever as part of the defence cuts! Planet Abba made it a night to remember. I cannot praise their performance enough. Thanks again.
- Lorraine Cole

The best Abba tribute band I have ever seen, you guys were fantastic!
- Derren Brown

In my line of business I come across many tribute bands and have indeed seen a number of Abba tributes, but I have to say Planet Abba take some beating!!
- Steve Wright

"Band were great, turned up in plenty of time, everybody enjoyed them, gave them a Christmas dinner and a complimentary room at the encore to get changed in"

Hi Scott Jordan
Absolutely fantastic will definitely have them back, and definitely advise anyone else to book this act. I was really impressed with their interactivity with the audience.

I just wanted to give you some feedback re Planet Abba. The group were extremely friendly, and professional. Getting set up quickly in the time allocated. They were just AMAZING! The band were fantastic. They managed to get the room involved, and a lot of people were up dancing (and singing along!). I cannot recommend them highly enough. Please pass on my thanks to the Band, and thank them for contributing to a successful event. They were just GREAT!

They were brilliant. I can find no fault.

The group were extremely helpful and accommodating - they gave a wonderful performance and really made my evening memorable. Everyone at the party had a great time.

I would recommend them without hesitation.

The band were fantastic. Suzi and the team were very professional, friendly and approachable.

They've all got great personalities and everyone commented that it was a fantastic night and a perfect tribute to Abba.

Suzi and the team had set up and completed all sound checks prior to the arrival of guests and Suzi took time to speak to me upon their arrival, to confirm finer details such as how my husband likes to be addressed and timing for singing happy birthday to him. The band were brilliant at engaging with the audience (wide range of ages) and made it a truly memorable birthday party for my husband.

Perfect band for a truly memorable evening. I would personally like to thank them for their energy and engagement and attention to the audience
Regards
Wendy
60th Birthday Booker

Hi SJE
I just wanted to thank you for providing us with Planet Abba and please pass on our thanks to them directly.

We had great feedback from the guests at the Care Awards 2018. The band members were professional, talented and put on an excellent show. Their soundcheck was completed in the given time, and they worked very well with our production team and crew.

We have been staging this event for the past 8 years, and this was the first time that the dancefloor was filled immediately, and then full for the entirety of the two 45 min sets.

The instrumentation, tracks, vocals, choreography and costumes were all
excellent too. They are a great, refreshing Abba tribute akin to the
original thing!

Sensation are one of the UK's premier Abba tribute bands, bringing the authentic sound of Abba back to life! With particular attention to detail, Sensation combine high quality musicianship...

Inferno is one of the UK's very best and longest established Abba tribute bands. Featuring stunning all-live vocals, fabulous costumes, dynamic choreography and a good helping of humour and audience...