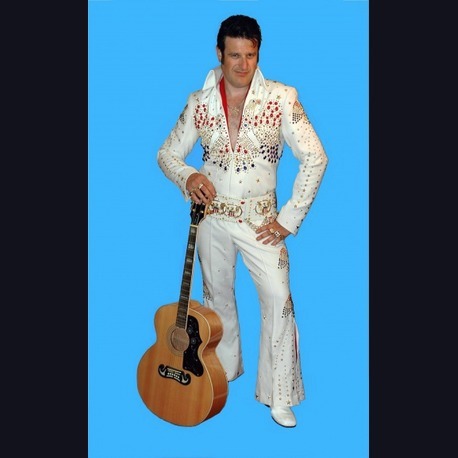 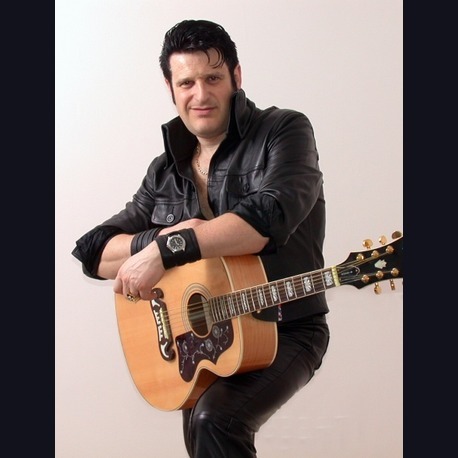 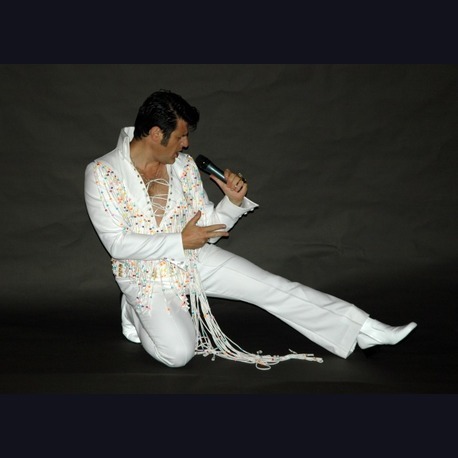 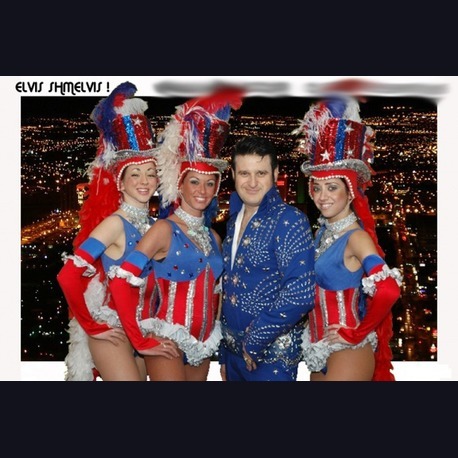 Always On My Mind

If I Can Dream

Elvis Shmelvis is arguably the top Elvis Tribute Artist in the UK. Having performed on thousands of occasions at venues throughout the UK, he is highly sought after by many top organisations and companies for corporate entertainment.

Elvis Shmelvis is not just another 'Elvis impersonator'. He is an accomplished guitarist and foremost, a true professional entertainer. He does not just stand there and sing, he likes to move among his audience, making it an interactive show and an unforgettable event.

Often accused of miming because his voice is so true to the original, Elvis Shmelvis is a perfectionist in his act, even having his suits imported from the USA, made by the same people who made Elvis'.

So professional in his act, he has made numerous television and radio appearances, including BBC 1, 2 & 3, ITV, Sky, CNN, Channel 4 to name but a few. He has been featured on programmes such as Blue Peter, The Weakest Link, The Kilroy Show, Celebdaq, CITV, virtually every news channel, Test The Nation as well as having a part in a BBC1 drama.

Elvis Shmelvis has performed in front of 30 - 100,000 people at music festivals, including the Bristol Balloon Fiesta, Milton Keynes Bowl and 'Jammin' In The Park' Reading, sharing a stage with Ronan Keating, Sugababes, Atomic Kitten, Blue among others. He has also worked
recently with Frank Bruno, Chris Tarrant, Eastenders, Claire Sweeney, Steve Wright on Radio 2, Tony Blackburn and Chico and many many more.

Elvis Shmelvis has performed his own show in London's West End, was the closing act at the London Arena, and has been entertaining pre-match and halftime crowds at Arsenal FC, Watford FC and Luton Town FC. In early 2005, Elvis Shmelvis was chosen to be presented with an award by the Coca Cola Charts to mark the 1000th Number 1 in the UK pop music charts. In addition
to this he has won a place in the Guiness Book of World Records and was also featured on CNN world news as making the largest physical bet in betting history!

Elvis Shmelvis is available for a variety of functions, including;
'Cabaret - After Dinner Entertainment'
Weddings
Trade Shows
Elvis 0 Grams
Corporate Events - Elvis Shmelvis usually starts with a few Elvis favourites, then telling a few jokes, before getting an agreed member of the audience, or even the CEO to dress up in a jump suit and help him sing a few hits.

When you book Elvis Shmelvis, you will get the whole package; the moves, the looks, the suits and the voice (ah - what a voice!)
Shortlist

I thought I heard Elvis Presley singing, then I walked around the corner and saw it was Elvis Shmelvis.
- Chris Tarrant

Your suit is nicer than mine, can we swap?
- Bob Monkhouse

Elvis Shmelvis is a serious and very good tribute to Elvis Presley. There is a sincerity about him, a true appreciation of Presley as a singer and artist, that marks it out from many others.
- The Stage Newspaper, Nov 2003

Elvis Shmelvis still looks a cut above others on the circuit.
- The Stage Newspaper, Oct 2006

Just to say a tremendous thank you for helping to make my 60th birthday so memorable. I had a wonderful evening and judging from all the letters I've had, so did everyone else! You took care of the whole event so I didn't have to worry about anything. That took some doing as I'm the world's worst worrier! Comments like - Elvis Shmelvis is a great singer; he included everyone; he played exactly the right sort of background and disco music; a real tribute to Elvis; SO entertaining. Norman and I felt everything was perfect - the venue, the food and the entertainment. It was a very special evening and thank you again for the part you played. Best wishes.
- Christine

'I booked Elvis Schmelivs as a surprise for my husband at our wedding reception in August. He went down a storm! Martin and his wife Sue were lovely to deal with and very professional. Nothing was too much trouble.
All of our guests commented on how good he was. My husband even dressed up in a spare jump suit and did a duet with Elvis Schmelivs which really topped off the night - thanks guys for many happy memories!'
Wayne and Mel Clarke, Leicestershire.

Elvis Shmelvis - 1 Set Cabaret
This is a 25 - 30 minute professional Elvis cabaret with full costume and full sound system, suitable for small to medium sized hall. This is ideal for any event.

Elvis Shmelvis - 2 Set Cabaret
Similar to above but with two cabaret sets spaced at prearranged times during the evening.

Elvis Shmelvis - 3 Set Cabaret
Similar to above but with three cabarets. This is very popular with a mixed audience e.g. at a wedding where the client may require a Frank Sinatra set during reception or dinner, a Tom Jones set after dinner ending the evening with a Vegas style Elvis set.

Elvis Shmelvis also performs as Tom Jones and does a 'Ratpack' show featuring songs from Frank Sinatra, Sammy Davis Jnr and Dean Martin. These different cabaret's are very popular for events lasting an evening where there may be a reception followed by dinner etc. It is not unusual to find Elvis Shmelvis performing a Ratpack set dressed in tuxedo and bow tie during reception then come on with an Elvis cabaret later in the evening.

Elvis Shmelvis also runs a disco, meaning you can let him run the entertainment for your entire event. Provide background music and disco between the cabarets, keeping everyone entertained the entire evening. This is used mainly for weddings and corporate events.

A Tribute To Elvis Presley

In 2005 Darren started his latest addition to the show, The King Of Rock and Roll Elvis Presley!!!!!! With his fantastic power and vocal range, Darren brings the house down. Darren stands out as a...

Kurt Tallon has been singing professionally for around ten years and has toured as a solo act with full P.A. and lighting show, or with his live band - The "In Memory of the King Showband" and his...