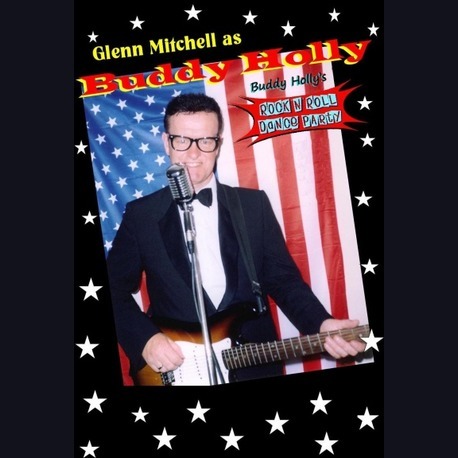 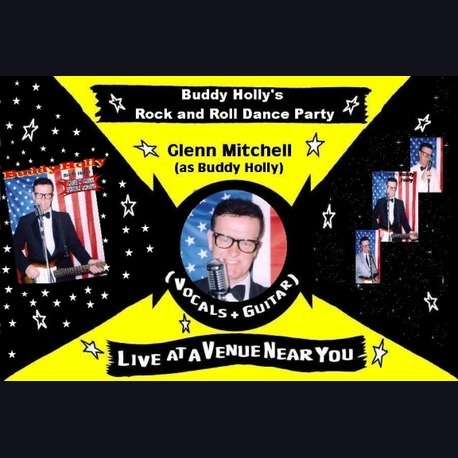 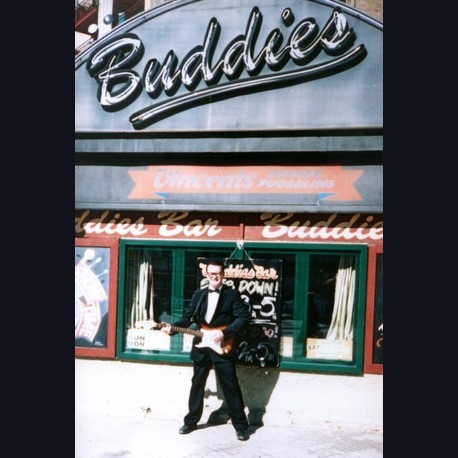 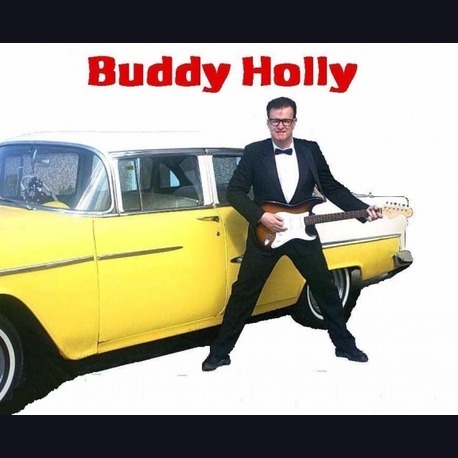 It's a Rock and Roll Dance Party... a tribute to the legend that is Buddy Holly, all the hits and more in a show covering the life of Rock 'n' Roll legend Buddy Holly performing all his classic hits right up the day the music died.. a stunning show, that brings back Buddy Rock'in and a Bopp'in.

In the early hours of Feb 3rd 1959, following a concert at the Surf ballroom in Clearlake Iowa, Buddy Holly along with fellow rock 'n' roll stars, JP the Big Bopper Richardson and Richie Valens chartered a small aeroplane to take them to their next venue ahead of the rest of the members of the 'winter dance party' tour. This decision to go ahead of the other members was to be a fatefull one, for just Four minutes into the flight the small light aircraft crashed into the hard snow covered Iowa corn field killing all on board. The world awoke to the news that three of the nations top Rock 'n' Roll stars had all perished.

Buddy Holly was in the prime of his recording life, just what he would have gone on to achive had he lived will now never be known but his contribution to popular music has lived on, his influence is all around, with major artistes paying homage to Buddy, Paul McCartney was such a huge fan that he bought the rights to the Holly song catalogue.

The Rolling Stones had a major hit with 'not fade away' and guitarist Keith Richards is often quoted as saying he has used a few of Buddy's guitar licks in concert and on record. Modern acts have included Elvis Costello, Jarvis Cocker who have a more than passing resembalance to the image of Buddy Holly. Buddy Holly's music has not faded away but has become ingrained into our culture as a rock 'n' roll hero of the Fifties, Elvis did fade away in his later years, but Buddy by his unfortunate and untimely death will for ever be that vibrant energic rock 'n' roller.

Now over Fifty years after his death his music and personality is being brought back to life, in a vibrant Rock 'n' Rollercoaster ride of a show through the career of Buddy Holly performing as Buddy Holly is former West End cast member Glenn Mitchell, who toured as Buddy Holly in shows across the UK and Europe not only in 'The Buddy Holly Story' but Rock and Roll shows together with Elvis Presley in 'American Trilogy' and 'Rock and Roll Legends', summer seasons in Benidorm and Legends in Blackpool and appearing at the Buddy Holly appreciation society summer ball are all highlights of his career, playing respect to a true musical legend.

All Buddy's classic hits are performed and more using a bespoke replica Sunburst Fender Stratocaster 1955 guitar, some song are performed just using an acoustic guitar a Gibson J45 as used by Buddy. Buddy's authentic 1950's stage clothes are worn and on stage decor sets the scene back to the Rock'in Fifties. Original radio announcements are also used that brings the show to its ultimate end, 'The day the music died'.
Shortlist

'It has been an absolute pleasure to have worked with you this season. Your professionalism and attention to detail in your shows has been outstanding. Sorry to see you go back to the UK, but your Buddy Holly Show is always welcome to return myself and the many hundreds of people you have entertained over the season wish you continued success.'
- Andreas Muxal.
Venue owner Benidorm

'What a great event, so much fun and many thanks for all the extra work in the photo session you did for the newspaper you certainly got the venue off to a good start. A super day.' Press launch of new Fifties style Diner restaurant.
- Julie Glover.
Operation Manager OK Diner Company

'Thank you so much from the bottom of our hearts, amazing evening and you did so much to help our guests enjoy our Fifties style wedding, your show was Buddy Brilliant, if I can use your tag line, it really was, everyone will be very tired after last night dancing.
Can't wait to book you for our anniversary'
- James & Kathy Richards.
Wedding function. Cheshire

'Wow a rock'in night that was, Thanks mate for a another great show, look forward to next time, love the new stage gear, and thanks for playing my favourite Buddy song 'Wish'in'. The end of your show there wasn't a dry eye in the house a stunning tribute to the man, he rocked and so do you.'
- Junction 19 venue.
William Overton

The Del Sharrons are a female fronted 1950's/60's band in the UK and we specialize in bringing the Classic Rock n Roll hits from the Golden Era of music back to life, with tight harmonies, strong...

We are a Brian Setzer Orchestra, Stary Cats, 50's rock tribute band. Americano is a modern swing rock- americana band playing timeless songs with an energetic edge. The band is formed by seasoned...

The band is a traditional rock and roll band playing classic numbers from the 1950s and early 1960s led by a great frontman who communicates with the audience, this colourful and talented band...

The Milkshakers Story: James, Mercedes, Karl and Mark and are The Milkshakers. Sharing a love of all things fifties, this young young London based four piece have a musical CV as long as your...